Rivalry Intensifies as CV Rises in 5A Relevance

Once the Underdog, CV Now Plays Role of Favorite 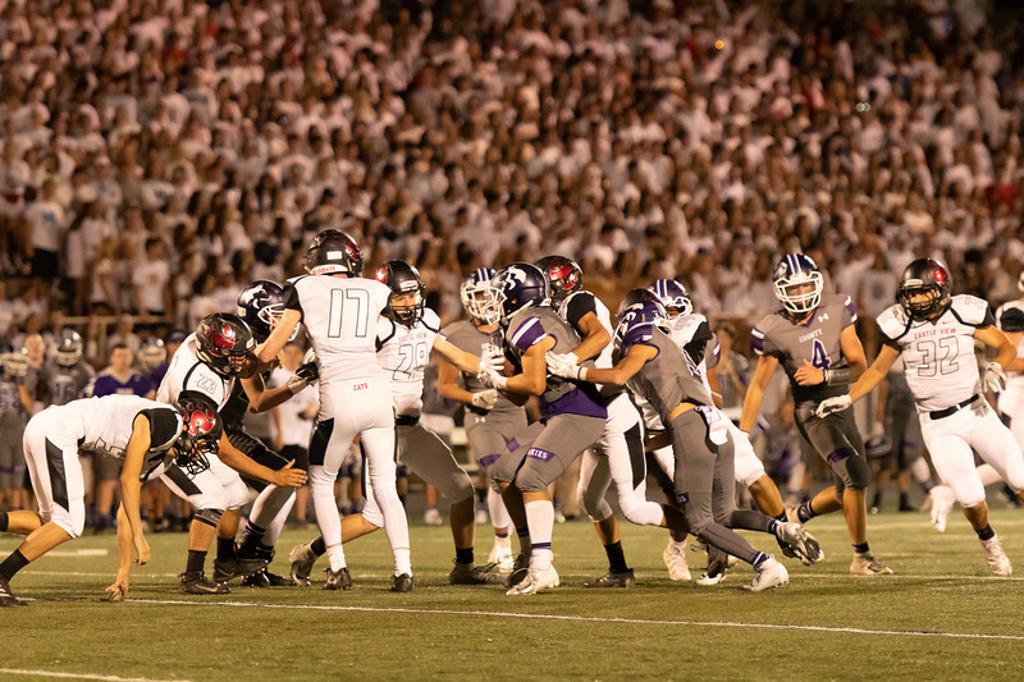 It was February 20th, 2015.  “Let’s play football… let’s play football”, chanted the roaring crowd of students wearing purple inside of the gymnasium at Douglas County High School.   The CV varsity basketball team had taken the go-ahead lead in the game that night which would deliver the Sabercats a victory in the budding basketball cross-town rivalry game.  Regardless of the loss, DC students proudly reminded the large Castle View crowd that its football team had never lost to Castle View.  That was February of 2015…

The year that Castle View opened its doors in 2005, Douglas County Football was in the midst of an impressive run that would bring football relevance to the town of Castle Rock. In a three year period, DC won a 5A championship, was a runner-up and made it to the semi-finals. Douglas County had 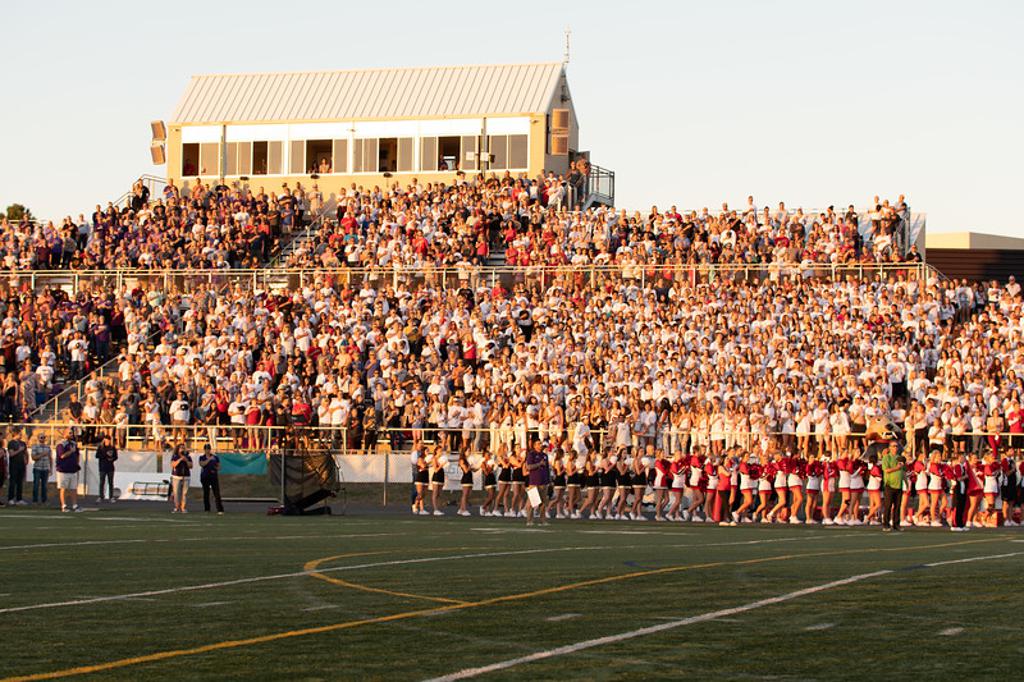 indeed taken great advantage of being the only High School in Castle Rock.

Meanwhile, across the interstate, Ryan Hollingshead had accepted the incredibly daunting challenge of not only launching a program, but building it without Seniors for 3 years and doing it in parallel with a school located only minutes away which was contending for state titles.  Hollingshead would go on to build the foundation of a great program, eventually leading his team to the state 4A semi-finals within 6 years of the launch. Despite his incredible success, a victory over Douglas County was something that the coach was not able to add to his impressive resume.

The first meeting of the two teams occurred at DCS (Douglas County Schools) Stadium on September 7, 2012. Despite 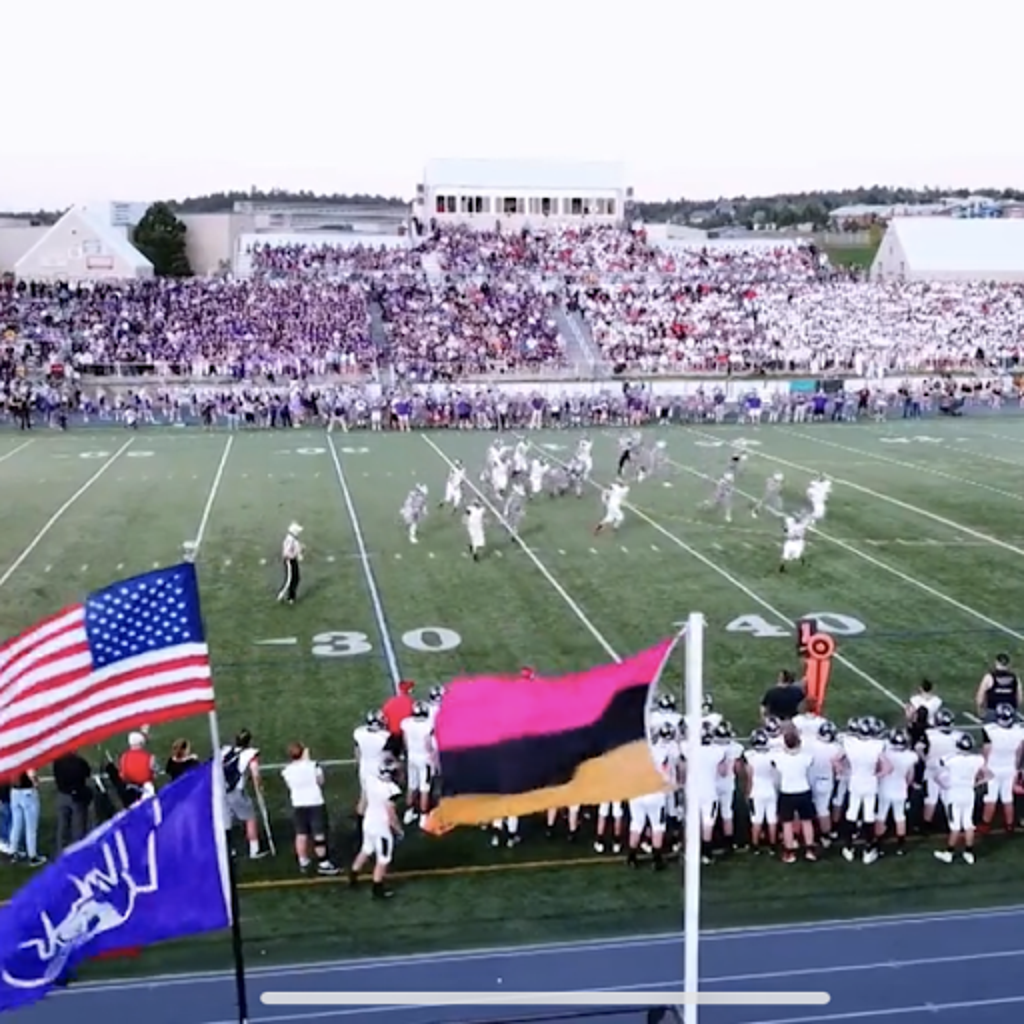 a great effort by the Defense and a solid night by  Ryan Fila (sr) with 114 yds rushing and another 3 catches for 37 yds, the Sabercats fell to the Huskies by a score of 20-17.

On September 6, 2013, the rivalry became a bit more embittered when, with the game firmly in hand, then Huskies Head Coach, Jeff Ketron chose to kick a field goal at the end of the game, extending the margin of victory for DC to 33 points.  In Ketron’s defense, his kicker, Bryan Wyatt was in his senior year and was being recruited by a number of D1 schools and would go on to have a phenomenal career at Colorado State.  Despite this, it was perceived by some in the Castle Rock community, in particular on the west side of the Interstate that Ketron was “pouring it on” unnecessarily.  Regardless if this was true, perception can sometimes seem like reality.

In 2014, under a new Head Coach for Douglas County and in front of a record crowd at DCS Stadium, DC would narrowly escape with a victory in a tremendously entertaining game.  DC won that night and extended their win streak to 3 in the series.

“The night that DC kicked that field goal was the night I decided to be a Sabercat instead of going to DC”, stated a CV Football captain who graduated in 2019.  “It really felt like Douglas County was bullying CV by running up the score”.

The captain who was a 7th grader at the time  was amongst a class that vowed to themselves that they would never lose to the Huskies.  In 2018, they completed their quest, because over the past 4 meetings, the Sabercats have been perfect, dating back to October 19, 2015 when CV finally got over the hump. 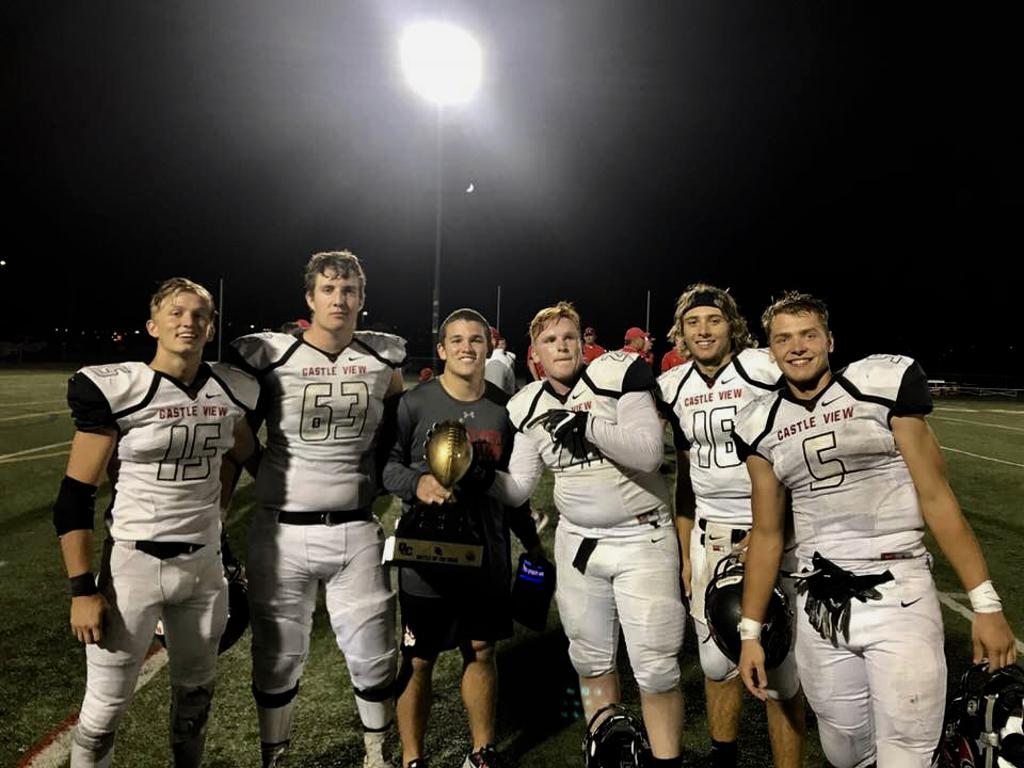 The win over DC in 2015  was the lone victory for Castle View, but served as what would seem to be a seismic shift in High School Football superiority in Castle Rock.  That night, CV would prevail with a thrilling 21-18 victory over the “Big Brother” school across the Highway.

In 2016,  the season opened up against the Huskies and again, CV would go on and slip out as the visiting team with a narrow 3 point victory with a score of 20-17.  That night, after falling behind 10 points, senior Dominic Ursetta returned a kick 97 yards for a touchdown.  Suddenly, the series was beginning to even out a bit.

In 2017, the Sabercats hosted the Huskies.  But there was something different about DCS Stadium that night.  For the first time, it did not feel as if the Sabercats were playing at the Douglas County’s home

field.  This was the night that the “Cat Country” signs were displayed and the “stadium takeover project” was initiated.  Despite being named Douglas County Schools Stadium, most people refer to it as DC stadium, implying that the stadium belongs to DC exclusively.  And who could really blame anyone, as it is on the grounds of Douglas County High School.  The signs however, transformed the look of the stadium and for the first time presumably, DC may have 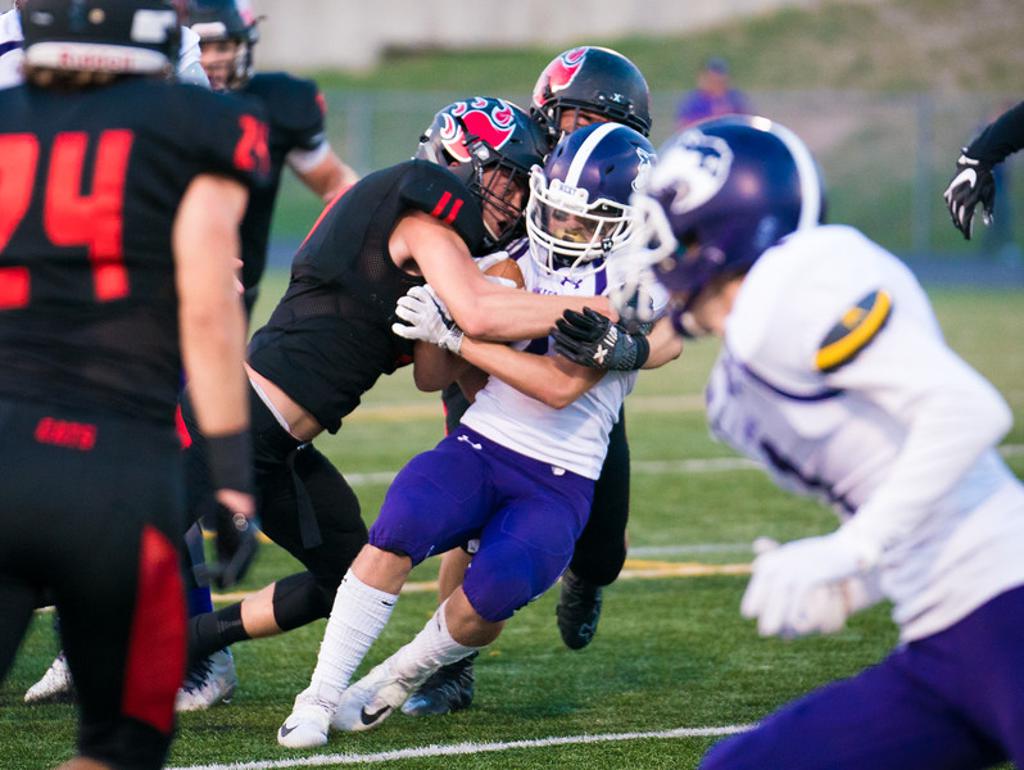 not felt that they had exclusivity to the field.  The Sabercats would go on to triumph that night in front of another record crowd with more definitive 24-10 victory.  The series was now 3-3.

In 2018, CV had a new Head Coach.  Trying to keep his squad from becoming distracted, Coach Todd Casebier decided to warm his team up at his own field.  The visiting Sabercats busses pulled up to the stadium minutes before kickoff.  His team, which included the group of seniors who vowed to never lose to DC would prevail with a 28-0 shutout over the once dominant Douglas County Huskies.  By the 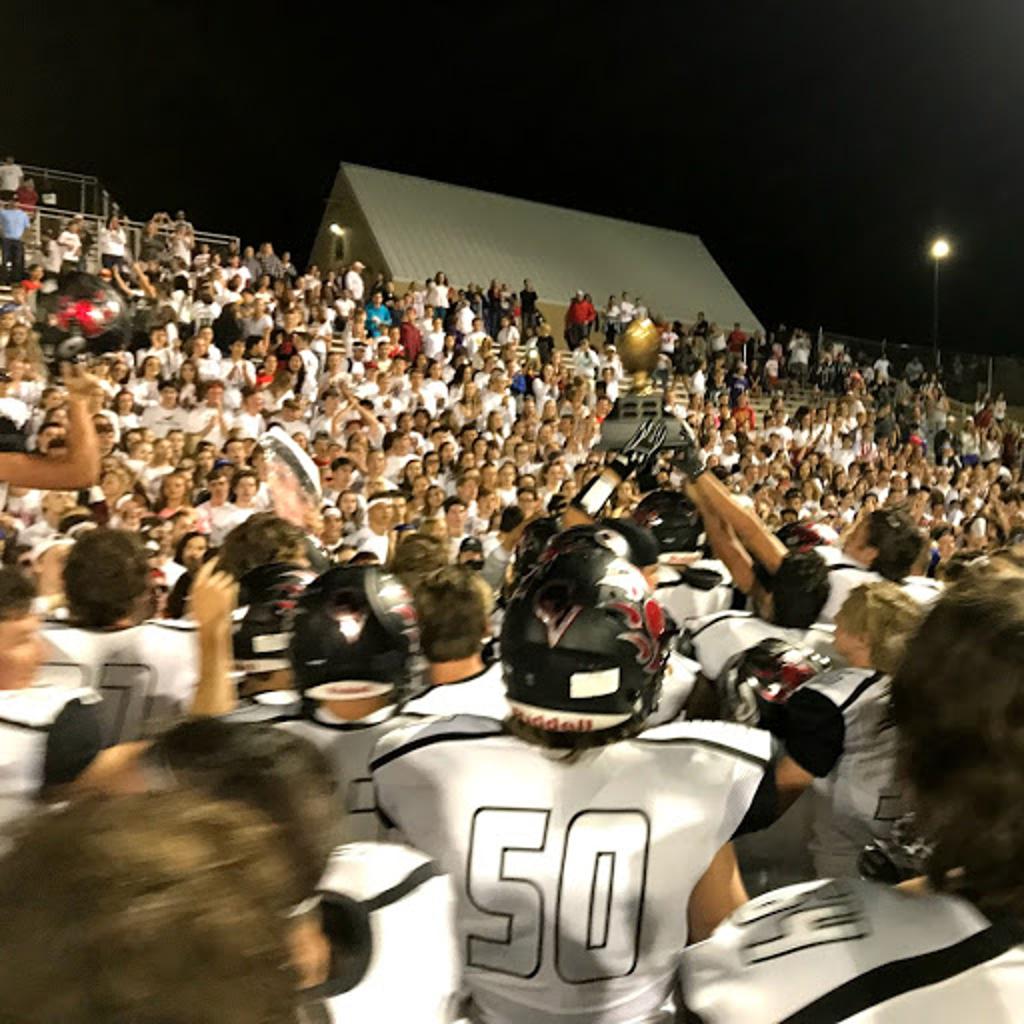 time that the Sabercats were hoisting the “Battle of the Rock” trophy, they had now taken the advantage in the rivalry series.

In 2019, expectations for both programs are huge.  The Huskies (2-1) have a new Head Coach and are one bad quarter from being undefeated. The Sabercats (3-0), have won 11 of their last 15 games and aspire to not only make the playoffs for the second straight year, but go beyond the second round.  For the first time in the series, both programs have a lot at stake as it relates to their playoff dreams.  This matchup is an important non-league game for both teams and there is little doubt that this should be a terrific game.

While CV now may be considered the favorite, make no mistake, anything can happen in a bitter, cross-town rivalry game.  Either CV will put some space in between their advantage in the series or Douglas County will even the score.  Regardless, the town of Castle Rock is the beneficiary of two potentially playoff bound teams, squaring off at DCS Stadium under the Friday Night Lights!