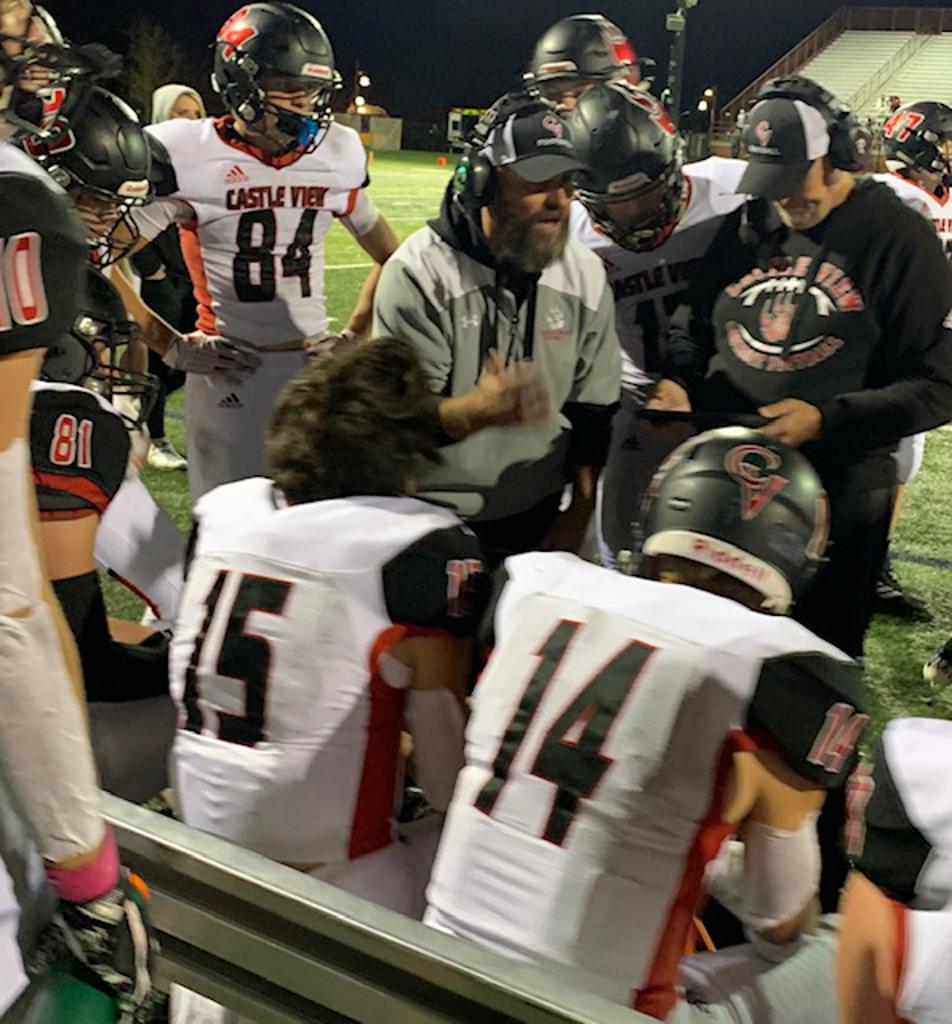 The Castle View Sabercats (5-3) roared on their opening drive, drawing first blood within 90 seconds of Kickoff on the legs of Jordan Jackson behind some impressive blocking. After a failed PAT kick attempt, CV led with 10:32 to go in the 1st Quarter, 6-0.

The Highlands Ranch Falcons immediately struck back with an impressive 4 minute, 75 yd drive of their own to take a one point lead.

Castle View answered the call and raced down the field, regaining the lead with a 32 yd TD strike from Colombi to Ursetta.  At the end of the 1st Quarter, Castle View was up 13-7, but the lead would not hold long as the Falcons once again scored a Touchdown early in the 2nd Quarter to regain the lead, a lead in which they would not relinquish for the rest of the evening.

With 10 minutes to go in the 1st half, it was quite clear at that point whichever Defense was able to make a stop or two and the team that would make the least amount of mistakes would be the team that would likely prevail.  On the ensuing possession, Castle View once again moved the ball, however a big defensive play by the Falcons coupled with a devastating holding call inside the 10 yd line would stymie the Sabercats drive.

While the CV offense was on the field, Defensive coordinator, Eric Handke encouraged his Defense to stay focused and come up with a stop.  The Falcons moved the ball, but the Castle View Defense did exactly what their coach had asked and began to slow the Highlands Ranch offense.  On a 3rd and Long towards the end of the first half, it appeared that the Castle View Defense was going to get the stop that they needed when prior to the snap, the HR offensive line jumped.  As the Line Judge on the CV side clearly motioned False Start, the Highlands Ranch sideline erupted, and captured the attention of the lead official.  They argued that Middle Linebacker, Jordan Jackson was simulating the snap count, causing the Highlands Ranch Offensive Line to jump.  It was abundantly obvious that the HR coaching staff influenced the call, because the officiating crew, without consulting with the Castle View Coach, penalized Castle View with an unsportsmanlike conduct penalty.

Jackson was not simulating the snap count, but rather was telling his Defensive line to "MOVE!" adjusting to the Falcons offensive shift. It was clearly a mistake on by the officials, but a hugely costly one for the Sabercats.  Instead of a 3rd and 13, the Falcons were gifted a fresh set of downs.  The Falcons capitalized on a confused and upset CV Defensive unit by scoring two plays later, extending their 1st half lead by a score of 21-13.

Halftime served as an opportunity for the Sabercats to calm down and shake off the bad call and make some important adjustments.  The Falcons would receive the kick, but Sabercats Defense came up big allowing the CV offense to return to the field.

Again, the Sabercats would move the ball effectively.  It had appeared that the Sabercats had recaputured momentum in a one-score game, however, the drive stalled out uncharacteristically inside of the Falcons 10 yd line where HR would take over on downs.

Going into the 4th Quarter, the game remained a one score game and the Sabercats Defense once again came up big forcing a punt.  On the following possession, a major momentum shift occurred when the Sabercats failed to convert on what would have likely been a sure touchdown when the normally sure-handed Antonio Ursetta failed to haul in a beautiful pass from Johnny Colombi.  Ursetta, the Sabercats leading Receiver who has been making great and sometimes unlikely catches all year had managed to get away from the defender and a good three yard separation with only green in front of him.  The missed connection was once again, uncharacteristic.

The Sabercats were now on the ropes as HR would deliver a knock-out blow as the Falcons scored with a 52 yd Touchdown pass.  The following Sabercats possession resulted in an interception and Highlands Ranch nailed the coffin shut with 2 minutes to go, padding their lead.

In a game that was close until mid-way through the 4th quarter, it indeed was the team that made the least mistakes who was triumphant.  And yes, the mistake by the officiating staff was costly, but the Sabercats still had many chances and you will not hear the CV team or coaching staff laying blame on the officials, who are human.

The pressure and urgency for Castle View has now increased. With 2 games to go, It is likely that a win will get them into the playoffs, but to gain a strong seed, the Sabercats will be looking to win out.  In order to do this, Castle View will need to get back into what they characteristically do best, which is limiting mistakes and scoring when in the Red Zone.

Castle View will host a struggling Rock Canyon (1-7) team in Castle Rock this coming Friday.  If we have learned anything about this Sabercats team over the past two years, we know they will rebound and get back to winning.  Every game from here on out will be big.