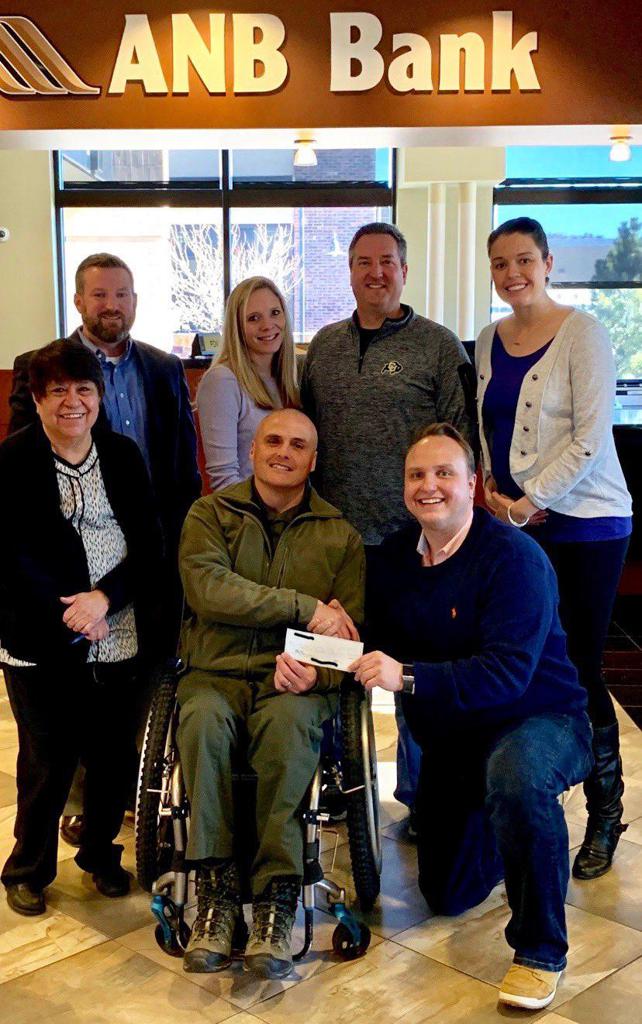 Over the past three years, the Booster Club for the Castle View High School Football program has evolved and changed.  Upon his appointment as the Booster Club president in 2016, Charles Oster was determined to do a number of things and cast vision for the organization. In a crowded meeting room on April 14, 2016, Oster spoke of building the absolute best support organization in Colorado that would not only serve the CV Football program, but help change the community in the process. Oster announced last December that he would be stepping down from the role after 3 years of service in January making way for Eric Plummer and Chris Stacy, the new president and vice president.  Oster had one more action to carry out before completely stepping away from the program.

“I believe that night [April 2016] was an important night because perhaps for the first time, our parent organization began to think outside of just football or being a typical booster organization,” stated the former president. The Castle View Gridiron Club was organized that month and registered as a non-profit corporation in the state of Colorado.  Oster continued, “It was our priority to take care of coaches and players.  Without them, you don’t have a program.  But it was abundantly clear that a large football program in a town like Castle Rock has the opportunity to be a positive force for good.  When you add up all of the players, coaches, parents and supporters, you are talking about hundreds of people and a lot of energy.  As the leader of the support organization, I felt as if it was our duty to stretch for more.”

Over the course of 3 years, the Castle View Gridiron Club was able to achieve some impressive marks. In 2016, The Gridiron Club launched important initiatives that began to raise awareness of the football program and upgraded the boys and girls locker rooms at the school and at the stadium, all through private resources.  That same year, it launched a new website, provided and paid for transportation where the district was unable and held its first ever, “Back The Cats” event.  In 2017, the Gridiron Club was able to land Terrell Davis for Back The Cats, amplifying the reach of the program and generating essential financial resources that helped the team acquire new equipment, such as helmets and uniforms that season.  That same year, the Gridiron Club upgraded the look at DCS stadium, which is located on the grounds of CV rival, Douglas County in order to make it look and feel more like Castle View’s home field during home games. Additionally in 2017, the Gridiron Club helped to organize an event for the Douglas/Elbert County Task Force which mobilized the football team to go out and raise essential resources for that local charity.  Furthermore, the club financially supported a hurricane ravaged school in Houston, Texas, all during that same period.

“It was in 2017 that we really began to see the power of organization, mobilization and getting people excited for common causes that went beyond Football,” acknowledged Oster.   "This is vital because the community needs to see the sport of football doing positive things.  This helps amplify reach,  promote corporate sponsorship, increase game attendance and stimulate interest; all of which supports the sport and its participants", continued Oster.  During the 2017 season, the Gridiron Club began talking about a scholarship that would reach out beyond the football program.  It was evident that enthusiasm for Castle View Football was on the rise in the community.

In January 2018, Todd Casebier and Charles Oster met for the first time.  Casebier was looking at the Castle View job and was impressed about how organized the booster club was. “I would like to think that our booster club was part of Coach Casebier’s decision-making process, but in reality, I believe Coach saw all of the upside as it related to the potential of the team and the opportunity to live in Castle Rock.”  Oster is quick to credit the school administration for their ability to land such an impressive coach.

“I told coach that a big part of what the Gridiron Club does is to support the Football program, but that our support goes way beyond just Football.  We wanted to use football and the influence that football program posesses to impact the community in a positive way. I told him that if his team is competitive, it will only help to increase the profile of the club and generate even more opportunities for the community to get excited and involved,” stated Oster.  Casebier’s team definitely became competitive.  In 2018, CV went to the second round of the playoffs and Casebier was named Coach of the Year by Mile High Sports Magazine, Colorado Preps and the South Metro League.

More than producing a winning season, the CV Football program reached the community in profound ways during the year.  Featured on television 11 times in 2018, CV began to catch the eye of media throughout the region.  Media attention was sparked by the gesture of a group of football players and a small group of parents.

During the summer, while the team was ferociously preparing for the upcoming season under the guidance of a new and demanding head coach, a group of the Sabercat’s football team headed over to Dan Brite’s house after practice.  The work party was organized by a parent of a player on the team.  Bret Hribar, a local contractor, leveraged his experience, having done lot of work building homes for veterans through various charities.  Hribar connected coach and the players to a project that would landscape a yard of someone in need.

Critically wounded in 2016, Detective Dan Brite has become an inspirational leader for the town of Castle Rock, Douglas County and the state of Colorado.  Given a very small chance of survival shortly after the shooting, Detective Brite has not only survived, he has gone on to do some amazing things.

The football teams gesture started a series of events that would lead to the Gridiron Club financially supporting the community project along with helping Brite and his wife, Christine to  launch the BRITE scholarship.

“As a first responder, we serve the community in an effort to make it safer. We often willingly and unselfishly sacrifice so much as we hold the line between good and evil. Unfortunately, there is a price to pay sometimes.

To bear witness to something as powerful as a community rallying around a fallen first responder is nothing short of amazing. The community support breaths life and hope into first responders, restores our faith in humanity and often times plays an integral role in healing.

The Castle View football team and the Gridiron Club did just that for me! Their support demonstrated that I was not alone. The community was willing to stand by me during my hardest time. That support allowed me to lift my head and look around at what the world still had to offer.

The Brite family and the Dan Brite Scholarship board members are extremely blessed to be able to pay it forward. We want to help others in our community become successful. We couldn’t think of a better place to start than with investing in our youth! We thank you, this is the best place to live!!”

The team and Detective Brite developed a strong bond with one another, which eventually lead to the team inviting Brite to become an honorary captain during the historic 2018 season.  Brite lead the team onto the field for almost every game during the season. 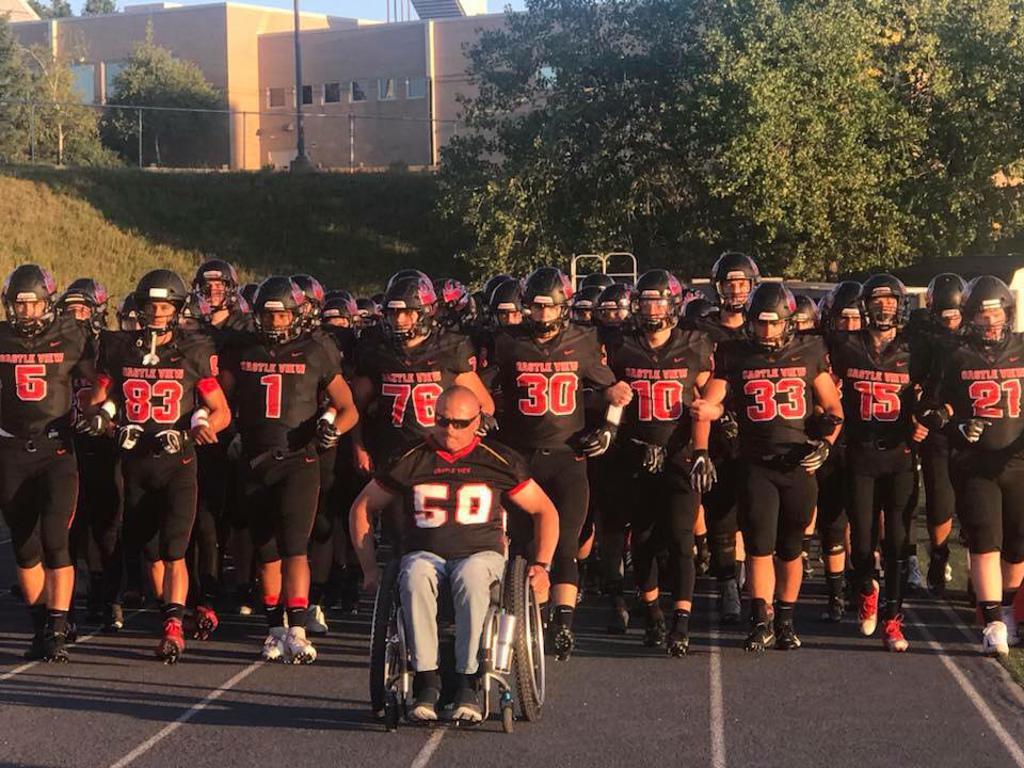 New CV Football Booster president, Eric Plummer , was also instrumental in the organization of the event last year. He worked closely with Oster, Casebier and the Gridiron Board to set up the scholarship seed money.  Plummer acknowledged, “Last season several of our football players volunteered time to assist in landscaping Officer Brite’s home. It was a simple gesture on their part, but it made a huge difference. Officer Brite was incredibly grateful and attended several of the team’s practices thru the summer. That relationship grew symbiotically and Officer Brite was actually voted an honorary team captain and led our team into the field each home game. The CV Gridiron board was impressed by this interaction and mutual respect. We decided to further pursue our mission in giving back to the community by seeding a scholarship in Officer Brite’s name. It is so gratifying to see this vision expand to become an foundation, in his name, with much greater plans than we ever imagined. I’m so proud to be associated with the young men, our football players, that are willing to help those in need in their community. It is rewarding to see the impact on our players and the community thru the CV Gridiron Club. It is truly flattering to get to know and be associated with such an example of selflessness as Dan Brite. He is a genuine hero in my eyes. Something incredibly positive has been created thru such an unfortunate incident."

In one of his final acts as a Gridiron Club leader, Oster was pleased to carry out a promise that was made back in 2016.  On February 20, at ANB Bank, Oster met Dan Brite, Eric Plummer and the team at ANB Bank.  Oster presented a check for $5000 to the BRITE Scholarship Foundation.

The Gridiron Club will remain close to the BRITE Foundation and act as the custodian for donations.  ANB Bank helped establish an account designated solely for the purposes of receiving donations that exclusively flow through to the BRITE.

It is clear that the community loves what the Gridiron Club and Coach Casebier and the football program are doing, especially sponsors.  “We at ANB Bank are proud to support such a worthy cause as The Dan B.R.I.T.E. Scholarship. As a community bank, we love to get involved and sponsor local efforts like the Gridiron Club is doing, year after year,” stated Abby Tardiff, Vice President of Commercial and Consumer Lending at ANB Bank.

Plummer stated, “Our goal is to give our sponsors the opportunity to support the student-athletes, coaches and the community through our assortment of sponsorship opportunities. Every dollar contributed to our non-profit is going to work for the community!”

Club vice president, Chris Stacy who once worked as the director of football operations for a Division-1 FBS college stated, "opportunities for sponsorship rival what some colleges wish they had.  Not only will businesses enjoy exposure, they will be supporting incredible causes".

Oster couldn't help but not to lament about some of the things he felt he had failed to accomplish during his time as president. "I still aim to see the stands filled to capacity at every single home game”.  Despite setting attendance records this past season, Oster still feels that there is much room to grow and that everyone in Castle Rock should feel the need and urgency to be at the stadium every Friday night in the during the Fall to support the student athletes of Castle Rock.  But in the end, he was mostly content with the work that was accomplished by the entire group or volunteers and is very optimistic about the future of the Gridiron Club and CV Football.  Oster concluded with the following statement, “We have to dream big and then be willing to go do the work that is required to accomplish those dreams.  While it is not easy, it is simple.  Dream big, work hard and good things will happen.”